Stock ranking systems are used to order a universe of stocks with the expectation that higher ranked stocks will outperform lower ranked stocks. We all want to pick investments from the pool of companies most likely to succeed - just like we want to fish in the spot where the fish are worth catching. Ranking stocks should improve the performance of both qualitative and quantitative styles of investing.

Benjamin Graham in the 4th edition of his book, The Intelligent Investor, suggested ranking the 30 stocks of the Dow Jones Industrial Average according to their Price to Earnings (PE) ratio and buying those with the lowest PE ratio. NOTE: The Dogs of the Dow strategy described elsewhere on this site is a modern version of this idea. 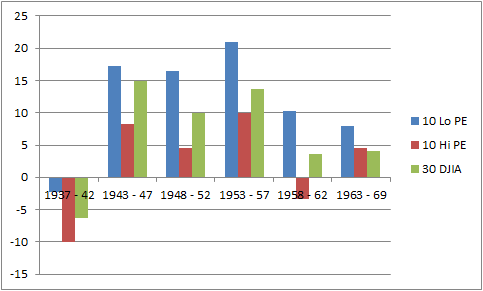 One of the first published studies on ranking was by Francis Nicholson in 1968. He used a universe of trust company grade stocks (blue chips) and divided the stocks into 5 groups (quintiles) according to their PE ratios. The 20% with the lowest PE ratio were put in a group and so on to the 20% with the highest PE ratio. Over the period from 1937 - 1962, portfolios were created for each quintile with holding periods of 1 to 7 years. At the end of 35 years, the portfolios created from low PE stocks outperformed regardless of the holding period.

The conflict with proponents of the Efficient Market Hypothesis (EMH) was also a drawback to acceptance of studies which recommended buying "losers". If the markets are efficient, buying losers meant taking additional risk. Later work by EMH theorists (e.g. Fama and French) overcame this.

In 2004, Joel Greenblatt introduced the "Magic Formula", a 2 variable stock ranking system, in his book The Little Book that Beats the Market. Rather than rank stocks by a single variable, Greenblatt uses 2 variables; Earnings Yield and Return on Capital. Each stock is rated by Earnings Yield and given a score. Then each stock is ranked by Return on Capital and given a score. The final ranking for each stock is the sum of the 2 scores.

The published results cover 17 years (1987 - 2004) but instead of 17 1-year holding periods, there are 173 since a new holding period is started every month and included in the results. The number of stocks held was 30. Although the study was further broken out by market cap, the performance listed in the following chart is for large cap stocks (only the last 7 years of the study are shown). 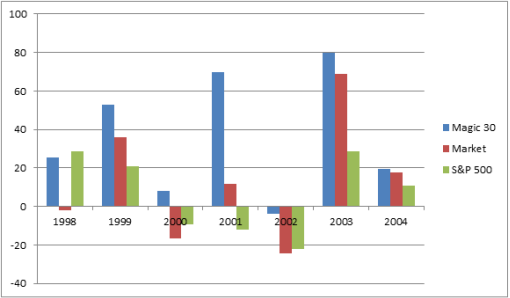 Note that the market represents buying the stocks of the 3500 stock universe in equal weights while the S&P 5oo index stats are cap-weighted. In ranking systems, the performance should be compared to an equal-weighted version of the stock universe involved.

Greenblatt recommends sticking with the Magic Formula for at least 3 years since in back-testing it outperformed the market at least 95% of the time.

NOTE: He also recommends NEVER investing in individual stocks unless you have Market Analyst type expertise.

How many variables can be included in a stock ranking system? Robert Haugen includes over 60. A bit much for most of us, but you can check his system out if you like complexity.

There are 2 general categories of stock ranking systems - qualitative and quantitative. Part 2 describes these in more detail.

This is true for the investing process which is why we describe some investment strategies, screening tools and market analysis.

Knowing what you intend to do is crucial since you need to be consistent.

Strategies of investing legends are an excellent starting point for developing stock investing strategies. Once you have a strategy, select the best tool to implement it.

Tools are the easiest way to implement a strategy in a systematic fashion.

Stock screeners are not the only tool, but they are one of the most important.

Once the tools are in place, a simple checklist will keep your investing process on track.

We value your suggestions, comments, and questions.

Our goal is to make this site as useful as possible.

Powered by Solo Build It

StockScreening101.com is a participant in the Amazon Services LLC Associates Program, an affiliate advertising program designed to provide a means for us to earn fees by linking to Amazon.com and affiliated sites.